A colossal shake-up is about to happen in Famiglia.

The likes of DonBrowShirt, AfricanShortHat, and VietnameseEvilFinger are being captured one by one, and a new class of Mafia bosses will be rising soon. With new names, these prison-hardened famiglia have stronger rivalry toward each other, and each will sport unique playing styles that promise to bring certain advantages to the unsuspecting Mafiosi.

You can expect the same innovative aspects of the current Gbanga Famiglia, like thephonebooth side-quest missions, real-world locations to take-over, and monthly promo quests that earn you real prizes.

This update will be Gbanga at its best, and we are extremely excited to bring you a new Famiglia. Our whole team has really pulled together an outstanding work to bring out a new experience on location-based gaming. We really hope that you will find all things Famiglia as fun and innovative as the Gbanga team does.

Since we expect to receive a considerable amount of new players in the next months, we decided to reset the current points & levels. This will grant all players the possibility to become the new Supreme Mafioso. 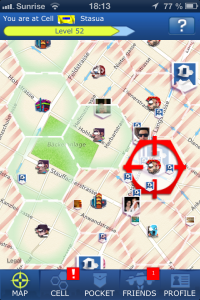 We’ve also removed all famiglias and created a brand new story. The new Famiglia presents 10 Famiglias and one police team, which will be competing against all Mafia. Each famiglia now has special mixed-reality skills and an arch-rival that rewards you bonus points when attacked.

Furthermore, the new Famiglia game will keep the cells’s history (name, flag, shouts,…). The cells you currently own will also remain on your control. However, as part of this Famiglia chapter, you will be automatically reassigned to the “neutral” Police Team. You will also be keeping your pocket items.

Thanks for your support,