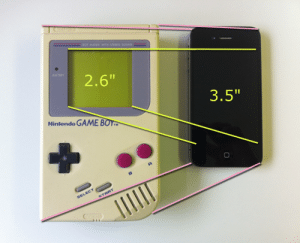 7777 days ago (on September 28, 1990), the Game Boy, Nintendo’s handheld video game device was released in Europe. Let’s take this jubilee as an occasion to identify upcoming trends for the next 7777 days. For this mind game, we have used historic facts and the mathematical method called extrapolation (defined below).

As Figure 1 shows, the trend of the Moore’s law will bring us devices with 2.39 Terahertz and 1.5 Gigabytes of RAM. While this is not extremely exciting, the analysis of the device size reveals some interesting details:

As Figure 2 shows, the form factor of the devices is going to be radially different where the screen size surmounts the device size. We derive from these numbers that some sort of superior light projection technology or retina implants will be key technology in the game industry by then.

Further dimensions for better game play!
Already in 2033, extremely small extents are expected, with negative values for device width (-0.07 inches in 2033) and device depth (-1.49 inches in 2033). Since that does not make sense in a 3-dimensional world, we understand these negative values as strong indicators for the existence of a 4th and 5th dimension which is expected to appear in 2033 in the gaming market anyway, as you can extract from Figure 3:

While the 80ties game worlds were 2.5-dimensional (an optical illusion to simulate 3-dimensions) and became 3-dimensional with the Nintendo 3DS, an exponential extrapolation shows that players will be able to enjoy 4 dimensions in 2033 and 6 dimensions in 2054. This opens space for a wide range of new game genres where gradually boring game concepts such as 3D chess and Snake can be spiced up a little bit.

Trend forecast by Gbanga
This trend forecast has been brought to you by Gbanga, the mixed-reality game studio specialized in enriched gaming experiences that leverage the full power of the latest technology. You can download the mafia-themed game Gbanga Famiglia from the App Store and play it on your way to work.

What is extrapolation?
In mathematics, extrapolation is the process of constructing data points based on a given set of data points. It’s like predicting the future based on stuff that happened in the past. For instance, if you had pasta as your favorite dish for the last 10 years, you would estimate that you very likely will be still a Spaghetti fan for the next 10 years.

Extrapolation is not necessarily linear as in the pasta example above. It is also possible to see exponential trends such as the infamous Moore’s Law that states that computer chips double their processing power every two years.