Our youngest fan and demographics of Gbanga players

Many thanks for your compliment, Jonathan!

Today, we have opened an interesting letter from a 5th grade pupil from Zurich, Switzerland. We were excited to read that he loves the game concept of Gbanga and would like to have a work taster day at our company. What in the world is a nicer compliment than one from an honest kid?! It completely made our day. 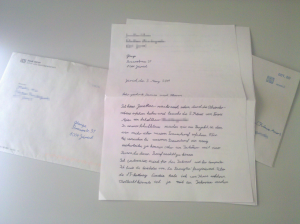 Different than you would have expected

The audience that daily plays Gbanga ranges from young to really grown-up. Half of our top-ten players are over 35 years old. This might now sound unbelievable, but we were ourselves surprised. When we launched the educational zoo game Gbanga Zooh in 2009, we tested the prototypes and betas with boy scouts. We assumed that the animal genre is most appealing to a very young audience. However, during the 3 weeks of the Zooh game, most players were between 20 and 30. The prototype target group that uses Facebook.

Reasons why players are older

Probably, the game is technically only available to adult players becuase of the required data connection. However, Gbanga is reported to be played on iPods with WLAN function. Also, the Zooh game was performed during summer vacation where a younger audience was on vacation, busy with their parents.

Mafiosos with a ripe old age

On average, the famiglia members of our ongoing casual location-based game Gbanga Famiglia are even older than 20 to 30 years. We do not request the exact age from our beloved players, but are extrapolating the age from our meetings with players in reality.

So, what is the consequence of all this: