2010 was an exciting year for us at Gbanga: We have published ourGbanga app for the iPhone, introduced Gbanga Famiglia, our first globally available quest running on the Gbanga platform where you compete against other Mafiosos over real-world establishments. Our world-wide user base is constantly growing with 10% weekly growth. Last week, we also have sold our first virtual goods, “Police Megaphones” and “Street-cred Speakers” that help players in succeeding in Gbanga Famiglia. For the advent calendar game Gbanga Nokia Xmas, our players have collected 16’530 phones in only 24 days! And as the first game in the world, we introduced location-based coupons in a game (currently only in Germany in collaboration with COUPIES).

For IMI Lucerne, we have created an e-tourism game tour through the open-air museum Ballenberg. We have hosted an incredible number of events this year: Smart Urban Stage, IBM Smarter Cities and i-days in Lucerne.

Gbanga made it to the finals of the Samsung Bada Developers Challengeand we won a cash prize and a device. Further, our work was nominatedin the category “Best Real World Game” for the IMGA International Mobile Game Award, was on the Shortlist of the Best of Swiss Web Award (BoSW), was among the Business Idea 2010 by Internet World Business and nominated as “Newcomer” for the Swiss ICT Award.

We were intrigued by the rise of check-ins (even Facebook participates in the war with Facebook Places) and not too surprised by the check-in fatigue. Check.in and ChatSq are great web-based solutions. Location-based gaming beyond check-ins also became relevant this year: a good example for this is the LBS Mini Getaway campaign in Stockholm and Coke’s TRON LiveCycle. After social gaming, we’re happy to see mobile gaming becoming a huge business: we were addicts of Angry Birds, Fruit Ninja and Cut the Rope.

We’re delighted that the Swiss game developers are now backed by the amazing GameCulture programme hosted by the Fedral Art CouncilProHelvetia. It’s also nice to see the success of the Orbital app and the innovative fund-raising game Amazivision by our friends at bitforge and the premiere of the new Swiss game studio Games2Be.

We’re happy that the “old game industry” is back: Call of Duty: Black Opsset  a new entertainment selling record across all media. The Move andKinect have been released; indicating that players are willing to move physically. And we congratulate the Marcus Persson to his insane success with the sandbox game Minecraft. We’re curious what Marcus’ new studio will ship in 2011. Also, we like the new approach to place a real story plot into a game like Heavy Rain did.

Some “Unwort”s in this year

We have learned a bunch of new words this year: Robert Scoble reported about the new term geo fences which is nothing else than a cell switch in Gbanga. Magazines, blogs and even wikis turned crazy about the idea of turning everything into a game: it’s called gamification, now, again. It describes the use of game play mechanics for non-game applications.The Email Game is a great example of gamification. Twitter Art (or TwArt?) describes tweets that use characters to visualize images. It does not work on all browsers and mobiles thou. We’ll post how to do Twitter Art (and line breaks in Twitter feeds) soon in this blog.

We also were excited about meaning-free lyrics like in Duck Sauce’s Barbra Streisand, impressed by the big bass power of the X-mini.

Besides an all-new Gbanga website (which this blog is part of), a mobile web version, we’re going to add incredible virtual goods and introduce exciting weekly side-quests in 2011.

We’re impressed by the reappearance of the browser war (this time on mobile) and hope HTML5 will solve it. We’re looking forward to the GDC 2011 in San Francisco where Gbanga is present at Swiss game booth #731. We believe in the ongoing crowd sourcing hype, especially in c-crowd.com.

It’s awesome, all the Xmas and New Years greeting cards, we have received from our start-up friends and beloved clients. Thanks toComerge, Doodle, Memonic, Nothing, GIANTS, Tektrooop, VZ,youngculture, AdNovum, IFS Rapperswil, FHNW. See below: 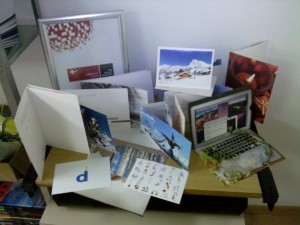